Any creative process is a series of twists and turns. You begin with an idea and see where it takes you. Sometimes it's obvious which direction to go in and other times there are detours.

I started another piece for my pandemic series. It began with two plates: a figure in a rope web and an image of Covid-19.


I originally thought that a break between the two images would work well and represent a safety zone between the virus and the figure. 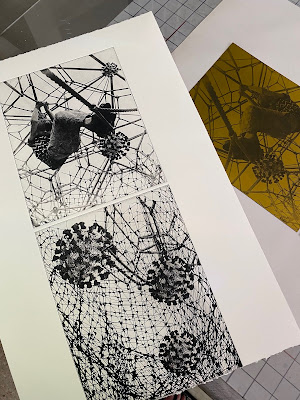 After pulling a proof and contemplating my next move, I decided that I wasn't happy with the image divided in two. It didn't look cohesive. The two smaller plates won't be discarded and will be fun to experiment with and see how they can be used in a different way.

The image was reworked and a new Solarplate exposed. 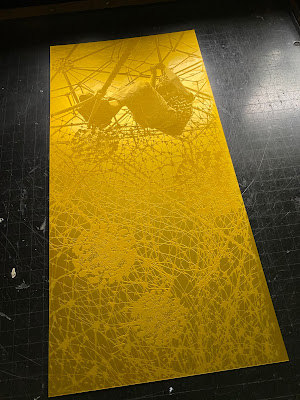 I'm happier with the new proof. Compositionally, the image is much more successful. Now to decide which direction to take.

I felt a second plate for background color would add to the imageI took the removable plastic sheet that protects the Solarplate and making sure that both plates were the same size, I rolled on color. 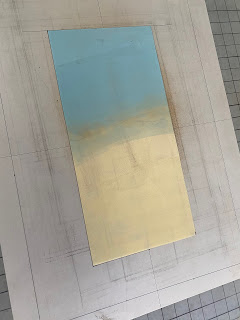 I'm pleased with the results and will now experiment with color strength.

Posted by Melody Knight Leary at 11:51 AM No comments:

Virus Series in the works 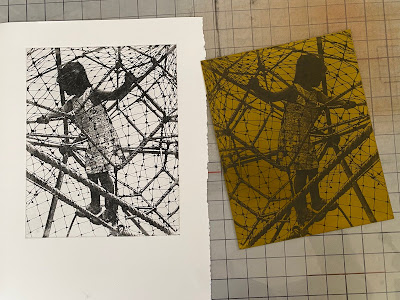 Again, I'm working with a Solarplate. I'm not so taken with the print yet and feel it needs something else. The dress has the virus pattern on it but I added chine colle' to highlight it.

I also applied a sheet of Awagami decorative paper to the background. 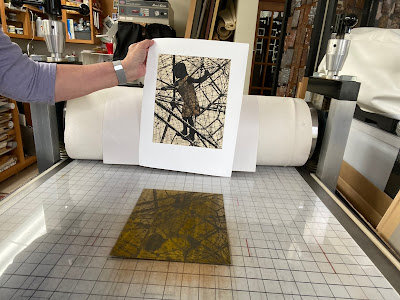 The print still needs some tweaking.
Posted by Melody Knight Leary at 7:46 AM No comments:

The state of things

Going through my photos, I found a couple of shots of the grand-kids climbing a web like rope structure. Being trapped in that environment seemed like the perfect metaphor for societies current situation: social distancing, quarantine, uncertainty, misinformation and conflicting viewpoints. 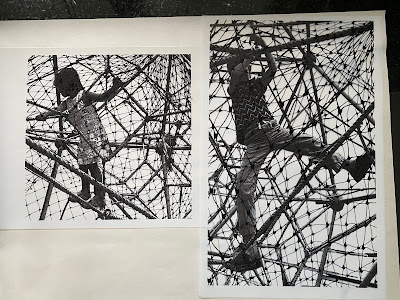 My originals were downloaded to PhotoShop, manipulated and extra webbing was added using a discarded onion bag. Positives were printed. 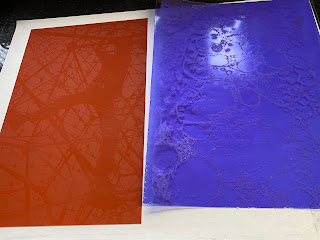 I exposed a Solarplate with the figure image, then decided to also create a second plate using ImagOn film for an image of the actual Covid-19 virus.

I was pretty happy with the outcome. My intention was to keep the figure fairly silhouetted so it would represent no one individual, but rather any individual. 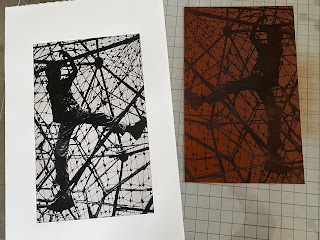 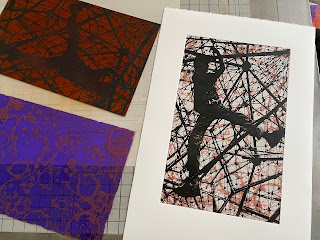 I was even happier after I added the background plate of the virus.


Posted by Melody Knight Leary at 7:59 AM No comments: 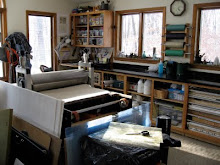